We are delighted to welcome you to the Association's official website, the place to keep up-to-date on the latest news, campaigns and events throughout the year.

The constituency's Conservative MP is Damien Moore. Please bookmark this website, have a browse and return frequently to see our updates. As ever, thank you for your support. 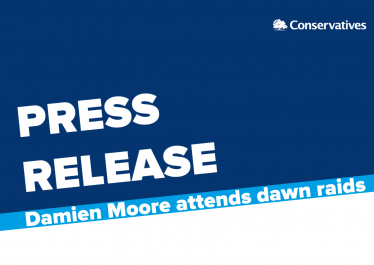 MP Damien Moore has praised Merseyside Police officers as he joined them for a series of drugs raids in Southport on Thursday (22 October). The Southport MP was impressed as he watched officers swoop to arrest a number of people during dawn raids which were carried out across Sefton and Liverpool.

Merseyside Police have since charged 11 people with conspiracy to supply Class A and Class B drugs after a series of warrants were executed.

They included seven people from Southport, plus one each from Banks, Mere Brow, Formby and Wavertree.

New statistics showing the huge Government support to businesses in The…

Our prospective Candidate for Cambridge Ward, Sinclair D'Albuquerque, has…

A local campaigner, Mike Prendergast, has raised concerns over the conditions

Our Further Financial Support for Jobs and Businesses

New statistics showing the huge Government support to businesses in The…

This map shows the extent of the geographical area that we represent on behalf of the Conservative Party.